The History of Photography, Part 1 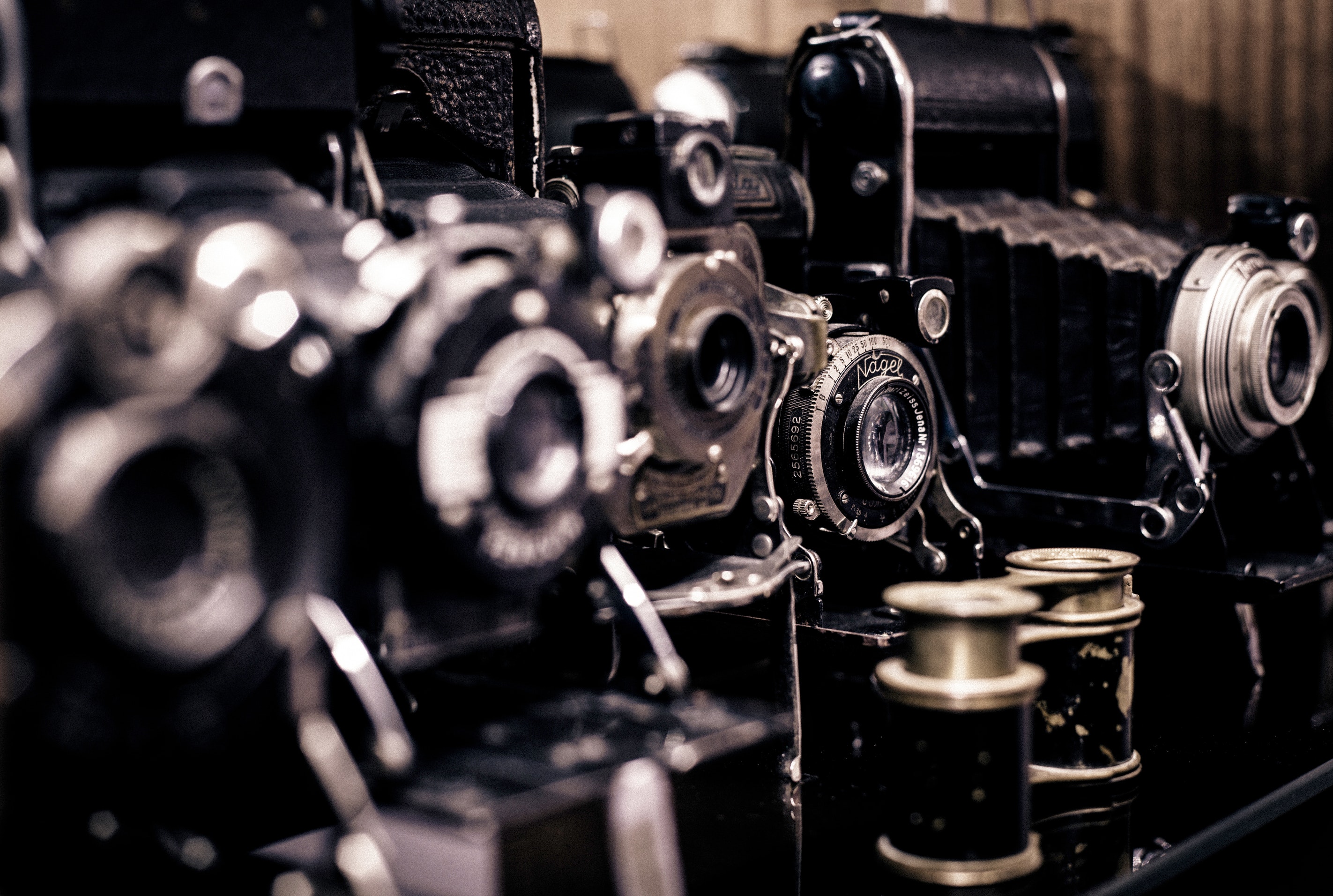 Here at Epic, we use cameras to document some of the biggest stories of your life, hoping to capture every emotion and feeling for you to look back on for decades to come. We LOVE what we do, and we have been doing it since 2009!


But that got us thinking, how long has photography been "a thing"? We have been shooting for over a decade now, and that's only a blip on the radar of photography history - SO many more stories have been captured before we were even alive. So we take you off the beaten path of our typical wedding photography blog with pretty pictures, and instead deep dive into the history of photography itself.


The word "photography" translates to "drawing with light" from the Greek words phos, meaning "light", and graphê meaning "drawing or writing". From what may seem like the beginning of time, people have been trying to capture moments in time through drawings, paintings, and even tracings. And the very first attempts at seizing these moments were done very early on, in the late 16th century and perhaps much earlier, through the use of what is called a camera obscura, first described by the Italian scientist and writer Giambattista della Porta (Magia 1589). This device was the great-great-grandfather of what we now know as the modern day camera. It was a box with a lens connected over a hole which projected an inverted image on the back of the box, where an artist could then trace it.


Since these boxes still relied on an artist and the ability of the artist to draw something realistically and beautifully, scientists continued looking for something that would create a permanent and more "automatic" image that did not rely on people to create.


Through his experiments in the early 1800's, a man in England named Thomas Wedgwood was able to produce a black and white negative image on paper or white leather, using a camera obscura. The paper or leather was treated with a chemical that was known to darken when exposed to daylight; silver nitrate. However, because the lighter parts in the image became dark when exposed to the light for more than a few minutes, Thomas was not able to fix (or stabilize) the image permanently on the paper/leather.


Not long afterward, in 1816, another man near Paris, France, named Nicéphore Nièpce, succeeded in capturing small camera images on paper treated with silver chloride instead of silver nitrate. Like Thomas Wedgwood, however, he was not able to permanently fix (stabilize) the images, so they would distort over time when exposed to more light.

In 1826-1827, however, Nicéphore succeeded in creating what is now known as the Heliograph Process or Heliography (from the Greek words for "sun drawing", from "helios" meaning Sun and graphê meaning "drawing or writing"). He was able to produce images by using bitumen of Judea spread over a silver plate after exposure to light, over the course of several days. This very first camera photograph showed a view from a window at Le Gras, his hometown in Burgundy, France. The plate he used still exists today.


In 1829, Niépce added a partner, Louis Jacques Mandé Daguerre, to his research. And in 1832, they added the last finishing touches on the process, by using a dilution of lavender oil during a second process, which lowered the exposure time to one day, rather than the original several days.


Nicéphore, unfortunately, died in 1833, soon after helping create the successful permanent images created from heliography, but his partner, Daguerre, continued with their work and found his own successes.


Innovations in the History of Photography


Daguerre was able to develop a technique using a silver-coated copper plate that was placed in fumes made with iodine vapor that formed silver iodide when exposed to light inside the camera. He made a breakthrough in this new technology when he found a "latent" image from a brief exposure could be developed further and made more visible by exposing it to mercury fumes and fix the image using salted sea water. This breakthrough allowed exposure times to go from hours and days to around 30 minutes and on January 7, 1839, Daguerre's discovery was presented to the French Academy of Sciences. Because of the importance of his discovery, the French government awarded Daguerre a lifetime salary in exchange for him making the method available to whoever wanted to use it, freely, instead of patenting it for himself, which would have prevented others from making, using or selling these kinds of images (in that country) until the patent expired.


This process was called the Daguerretype and produced a relatively inexpensive and very accurate representation of the people and things they reproduced. Because of this, France began exploding with photographers and photographic studios as the upper and middle classes all began wanting to have their portraits taken.


In July in the same year as Daguerre's presentation to the French science academy, another Frenchman, named Hippolyte Bayard, discovered how to "print" positive images directly onto paper covered with silver chloride. The sheet of paper was blackened by light and then exposed in a camera obscura, producing an image at a bit slower pace; from 30 minutes to 2 hours.

While the world was obviously aflutter with these new photographic inventions, many men in different countries continued working on the technology, trying to improve the techniques as well as the images they produced.


At the same time as Daguerre, in 1839, another Englishman named John Herschell discovered the way to fix images by dipping them in a bath of sodium hyposulfite, which is still used today!


Also in 1839, an Englishman named William Henry Fox Talbot resumed research he had started at the beginning of 1834, but had stopped for a period of time, until he had heard of Daguerre's invention. In 1841, William patented the first negative-positive process which made it possible to reproduce the same image, by using a negative on a translucent silver chloride paper. This is called the calotype. Despite being less detailed than the daguerreotype, it had the advantage of being able to be reproduced, so once William Talbot published his own discovery in 1841, it became the prototype for the negative-positive printing process which became the basis of the analog photographic reproduction processes throughout the 19th and 20th centuries.


Also in 1841, a French physicist named Hippolyte Fizeau (who is best known for first measuring the speed of light; the Fizeau experiment) replaced the silver iodide that Daguerre used in his process with silver bromide, which was much more sensitive to light. By doing this, he decreased exposure time to just a few seconds, making it possible to create portraits.


In 1847, a cousin of Nicéphore Nièpce, named Abel Niépce de Saint-Victor, had the idea to replace paper with glass pieces, to improve on the transparent paper negative process. To get the bromide to stick to the glass, he mixed it with egg whites (albumen), this resulted in much sharper, although very heavily contrasted, calotype images.


Though, back in France, many artists were unhappy with the new medium, worried it would take the place of their paintings and drawings some, like a man named Gustave Le Gray, were all too happy with this new creative way to express their art and became photographers themselves. Gustave Le Gray was, in fact, another man that helped the photographic technology go further when, in 1848, he discovered that if he applied wax to paper negatives, it made it easier to capture more details in the images. In 1850, he also invented a glass negative process known as "wet collodion". This method provided more detailed images than its calotype forefather but could be reproduced, unlike Daguerreotype images.


Photography in the late 19th Century


The 19th century is defined as the years from 1801 to 1900, and so far, we've learned how the first camera and first photographic processes were created, but obviously the techniques and processes were further developed over the course of the latter part of the 19th century, leading us to what we now know as photography.


In 1851, an Englishman named Frederick Scott Archer perfected the collodion process by replacing the egg white with cellulose nitrate, however, the picture had to be taken while the cellulose was still moist, and developed immediately. In 1871, another Englishman named Richard Meaddox, solved that problem by replacing collodion (the cellulose nitrate) with gelatin. This process was then perfected by another man, Charles Bennet. This new process meant that the gelatin-bromide plates could be stored before use, but it also meant that they were so sensitive that light exposure could not be for more than a fraction of a second. The work on the invention of the camera shutter became necessary, then, and started just before 1880.


Finally, an American man named George Eastman, the founder of the Kodak company, thought up the idea of a more flexible base for the photographs, in 1888. The popular glass plates were then progressively replaced by celluloid rolls, the precursor to modern-day rolls of film that became very popular during the 1900's beginning in the 1930s and 40s with filmography.


The History of Color Photography


While the first attempts to reproduce color in images were made in the 1800s, the very first attempts were unstable and were unable to stay true to the photo they were trying to recreate. In certain parts of photos were hand painted to reproduce the colors of things like lips, cheeks, and jewelry.

A man named Louis Ducos du Hauron created the first true color photograph in 1869 by applying light decomposition in the primary colors of red, yellow and blue. He would make three photos of the same subject, each of them through a different filter of red, yellow, and blue. He would then produce three positive images that he would then dye with the corresponding color of each of the colored filters. Afterward, he would superimpose the three images over the top of each other and this is how he was able to produce the colors in one image.


The first color process using only one plate, instead of multiple plates, and that was easy enough for amateurs and professionals alike to recreate was invented in 1906. This was called the autochrome plate and it was invented by the Lumière brothers; Auguste Lumière and Louis Lumière. Their process was based on trichromatic synthesis (the principle that color is created by subtracting certain colored rays from white light). It was produced on only one plate by joining it to a rainbow of microfilters in the primary colors together with very small colored grains of potato starches.


The discovery that some developers gave images one color instead of black and white by R. Fisher around 1911 gave color photography a completely new direction, however, and helped further the technology. The trichromatic principle was used in 1936 that helped found a company called Agfacolor films. These films and photographs were made of three superimposed layers that were sensitive to blue, green and red. A developer that gave every layer a color of its specific sensitivity was invented. The superimposition gave an image in full color. This ability to reproduce color led to the improvements in lens manufacturing that allowed the colors to be accurately represented on the film.


In 1935, two American men named L. Mannes and L. Godowsky improved this process and it was bought by Kodak where they named it Kodachrome. Today's processes are much more sophisticated, but they still follow the basic principles of Agfacolor and Kodachrome.


Film and photography exploded in further popularity as cameras, film, and movies continued to become less expensive and more accessible to people around the world, which only allowed for further technological advances, such as digital photography, which we will discuss in part 2 of our series The History of Photography.